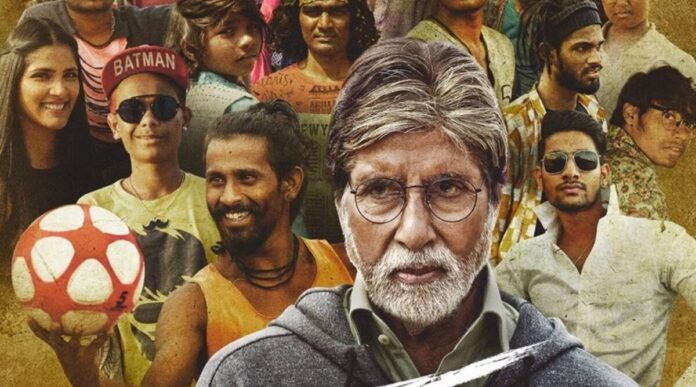 Jhund, a sports drama directed by Nagraj Manjule, starring Amitabh Bachchan, will premiere digitally on ZEE5 on May 6. Jhund was produced by Bhushan Kumar’s T-Series, Krishan Kumar, Raaj Hiremath, Gargee Kulkarni, Meenu Aroraa, and Manjule. The movie marked Manjule’s Hindi debut following famous Marathi films such as Sairat and Fandry. It also features Rinku Rajguru and Akash Thosar from Sairat, as well as a slew of new faces. Vijay Barse is the main character of the film. He is a Nagpur-based former sports teacher who pioneers a slum soccer movement and is played by Bachchan. The protagonist uses his experience and knowledge to break down social barriers for himself and his community, encouraging youth to be passionate about their aspirations and work hard to turn dreams into reality.

The story opens with Manjule giving us an up-close look at the slum people who survive off the land in Nagpur’s Gaddigodam slums. The youngsters engage in a variety of illicit activities, from chain-snatching to selling illegal liquor. When they aren’t using drugs, some of them gamble and engage in street fights. Vijay Borade (Amitabh Bachchan), a sports coach and social worker at St John’s School, is nearing retirement.  He encounters a group of slum kids who are playing football with a plastic bucket. Vijay becomes friends with them and teaches them how to play the game. As they learn more about themselves and the sport, the kids begin to set life objectives.

How To Watch Jhund On ZEE5?

Thanks to ZEE5, Jhund is coming to your screens. The unique sports docu-drama will provide audiences with a fresh perspective on India’s other side while also challenging them to consider their own lives. Just sign up with the streaming services and get a subscription plan. Premium users of ZEE5 can watch the movie online and download and enjoy it at their convenience. So, mark your calendars for the enormous digital premiere of Jhund on ZEE5 on May 6th, 2022.