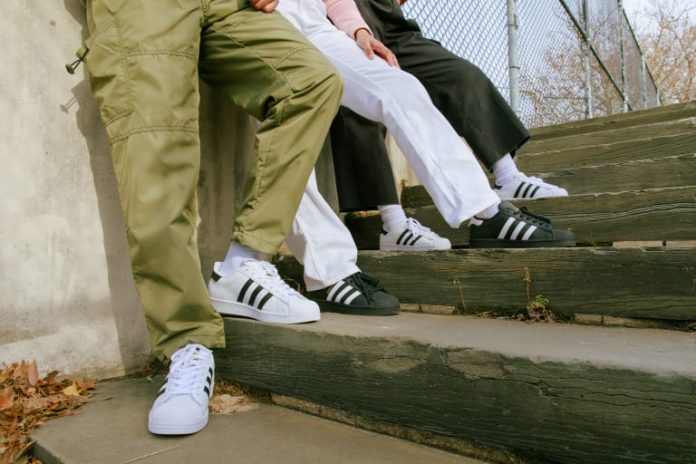 Did you know that Adidas is planning to make millions of shoes from plastic that they will recycle from beaches and coastal regions?

While you might associate Adidas with sports shoes, there is a lot more than meets the eye. They are working to be an environmentally-conscious company that provides a broad range of recreational shoes.

Why not check out some more interesting facts about Adidas in our in-depth article? Here are 9!

The first on our list of Adidas facts is the history of the three stripes that you find on Adidas shoes.

They were not originally invented by Adidas! Apparently, they were purchased from a Finnish shoemaking brand in 1951. Adidas thought that two stripes were too few, and four stripes were too heavy, so they opted to pay out for a three-striped design.

You will still see these strips on modern shoe designs such as the epically pretty Adidas Yeezy Boost 350.

Adidas is one of the most famous shoemakers in Germany. During the 1960s, the national soccer team was wearing Adidas shoes during competitions.

However, they sent an unusual request to Adidas. They asked that the shoes be suitable for changing rooms and shower rooms. After all, there are all kinds of gross things growing in these places.

Adidas complied and redesigned their shoe to meet the request. As a result, the Adilette shoe was released some years later.

During the 1980s, Nike began to dominate the sports shoe industry. This had such an impact that the giant Adidas shoe company almost had to contemplate bankruptcy.

However, tennis shoes came to the rescue. Adidas scored a major coup when tennis star Stan Smith signed with them.

The resulting partnership and his signature shoe design brought Adidas back up to the top of the sports shoe industry.

You may be aware of the full range of Adidas clothes. However, they did not always produce clothing.

The history of Adidas apparel begins back in the days of the famous soccer player Franz Beckenbauer. Adidas produced and named their first tracksuit after him.

David Beckham has proven to be one of the most marketable sportspersons of all time. He signed with Adidas in 2013 to the tune of $160 million. This was one of the largest sports sponsorship deals of all time.

You may be aware of the scientific advancements that Adidas has made in recent times. However, this is not new.

The very first Adidas shoe had a heel that was specifically created for sports field events.

Adidas continued to build respect throughout the 20th century amongst professional athletes. For example, in the 1962 Rome Olympics, 75% of athletes were wearing Adidas shoes.

So what do the three stripes on an Adidas shoe represent? Mountains, goals, challenges: the three things that Adidas shoes can help us to overcome every day.

Amazing Facts About Adidas and Much More

If you choose Adidas as your shoes, you are getting far more than stylish footwear. As these facts about Adidas show, you are getting scientifically-tuned sportswear that will support you through your journey as an athlete.

If you are interested in learning more about these topics, why not head over to our blog page for more of the same?