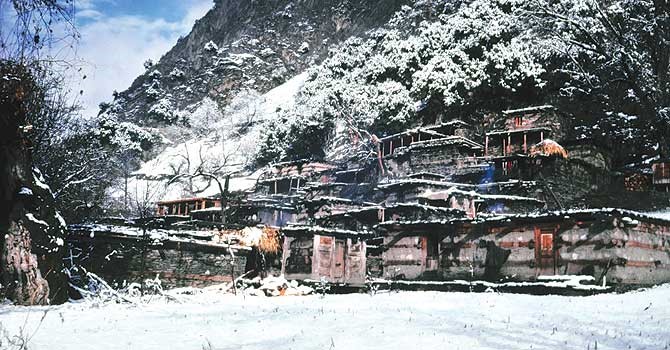 Situated in North west side of Pakistan, Kalash Valleys not too far from the border with Afghanistan. There is no easy way to get here. Kalash is actually the name of a collection of three valleys i.e. Bumburet, Bairir, Rumbur. Even in these valleys Bumburet is the biggest and best of the most tourist visit here. Kalash is a place out of this would. The Kalash Chitral also called Kafirstan.  The rest Muslims, including a height number of people who converted from Kalash to Islam. Kalash is listed by NUESCO as an intangible cultural heritage.

In this area the weather is generally warm. The average temperature is 15.7oc and average rainfall is 700mm. the winter months are rainier than the summer months in Kalash.

The Kalash are happy people. They celebrate different festival throughout the year. One of the main ones is called Uchau and it takes place on the 22nd of august the preparations for festival start days of before the main event. Women have makes their own dress they will wear at the festival. During the day people are busy with their normal life farming, preparing and so on but when the sun sets down they gather every night before the festival to dance and sign. This is the way worship their GOD. The festival attracts both local and international tourists. The Kalash festival is unique and somewhat taboo.

Education here is a privilege not a right only 18% of Kalash women and 25% of men go to school. Amongst the three valleys, there is only one high school, two secondary schools and ten primary schools. Kaslah and Muslim students both boys and girls study together. Kalash people are very proud of their culture and they are trying to preserve it but they want to have a better the education system and health facilities be able to improve their lives and their community.

Kalash means a black maxi-shaped frock with a black dress is based on a beautiful, colorful design. Kalash girls wear their traditional dress while the Muslim girls wear hijabs and cover their hair.

When you’re wandering around this part of the world, you have absolutely no idea what the scene is like. It’s a very different and amazing environment that you can see is a spectacular view. We have never seen a scene like this. You can go to Europe and see the mountains. Choices can be viewed you can see the spectacular views of them in New Zealand, but what I have seen here is that I have not seen it before.

If death occurs in the house of a Kalashi, they rejoice rather than grieve. They put the body in an open space and dance, sing than put the man in a wooden coffin under the open sky in the ceremony but now kalash has began to bury the men.

The language of the Kalash is the Kalasha and is a Dardic language. At one time during recorded history, they have been the Kalasha language had more than 5,000 speakers while presently their numbers are less than 4,000 and confined mostly to the geographical limets of Union council Ayun. With the passage of time, the kalasha people become continued to three v-shapes valleys. The Kalash language is currently incuded in UNESCO’s Atlas of the World’s Endangered Languages.

Ranging from religion to education, economic development and the influences of outside culture, many factors, have contributed to the decline of Kalasha language.

In 2015, the USAID small grants and Ambassador’s Found Programme awarded a one-year grant to Ayun and valleys development program, an NGO based in chitral of Kyber Pakhtunkhawa province of Pakistan for the preservation of kalasha language and culture.

The fist Kalasha Alphabet Book and Pre-reader were published by “Kalasha Kitap” in 1994 in Urdu style script.

The Kalash people sacrifice and they will take the message to GOD. Traditions are still same used to do things still same way but young generation don’t care about religion. The Kalash is religion and culture of independence there is no restrictions even then they are converting to Islam.

Kalash Valley culture is a rich a unique culture all over the world. In Kalash culture there is a concept of pure and impure onjusta(pure) and praga(impure) so there is certain place that are not allowed for women to go there the high pastures especially the altars and some temples. On the other side every young girl have the freedom to choose her husband herself.