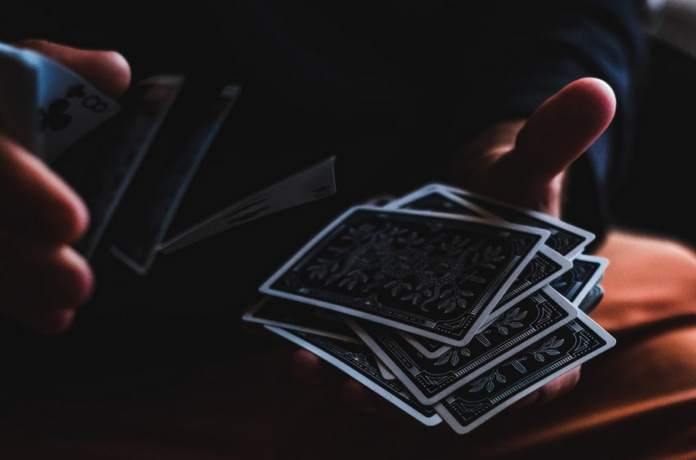 People have been performing card tricks since the 1400s. That’s well over 600 years ago!

Card magic tricks are still as popular as ever. If you’re looking for some simple magic tricks to perform yourself or with the family, there are thousands of options for you to try out.

This is one of the simplest card tricks around, and one you should learn if you’re just starting. First, ask a volunteer to shuffle your deck.

Then select a card and remember what it is, and put it on top of the deck. Take the deck back and look at the bottom card (this is called the key card).

Ask the volunteer to cut the deck, then place each card in the deck face up, one by one. When you reach the key card, announce that the next card you pick will be the volunteer’s card.

This is one of the best magic tricks around. It’s simple to perform, but it will make you look like a mind reader!

Again, start by asking a volunteer to shuffle your deck. Select the sister cards to the cards on the top and bottom (for example, if you have the four of spades, take the four of clubs) and display them on the table. These cards form your “prediction”.

Shuffle the remaining cards in such a way that the top and bottom cards remain the same. Next, your volunteer should place the cards from the top of the deck, face down, one at a time, until they choose to stop. Put the sister card to the one that was originally on the bottom of the deck on the pile face up, and then add the rest on top.

Repeat the process for the remaining prediction card. Then spread the cards from left to right across the table. The cards to the right of the two face-up cards will be their sisters.

Power of Four: One of the Easiest Card Magic Tricks

If you’re ready to introduce a little sleight of hand to your repertoire, this is a good trick to start with. Begin by flipping a deck over and checking the first four cards. Remember the fourth card you see.

Cut the deck into two halves and look at the first four cards in the left-hand deck. Now it’s time to make a prediction, which should be the name of the card you memorized earlier. Put the four cards back and place the left deck on top of the right.

Separate the two decks by putting the top deck on the right and the bottom on the left. The fourth card on the previous left deck will now be your prediction for the right side deck. You can repeat the process as many times as you like to firmly prove your psychic abilities!

And Now For Our Next Trick

Performing card magic tricks isn’t too difficult, but it takes a lot of practice to perform them perfectly. Be sure to work on your act too, adding a little banter and mystique to truly enchant your audience.

We hope you enjoyed reading our article. Why not let us dazzle you with more magical content? Our site is packed full of articles on all kinds of topics, so read away!

Galvanized vs. Galvannealed Steel: How Do They Stack Up?

Here’s What to Do When You Keep Getting the Hiccups