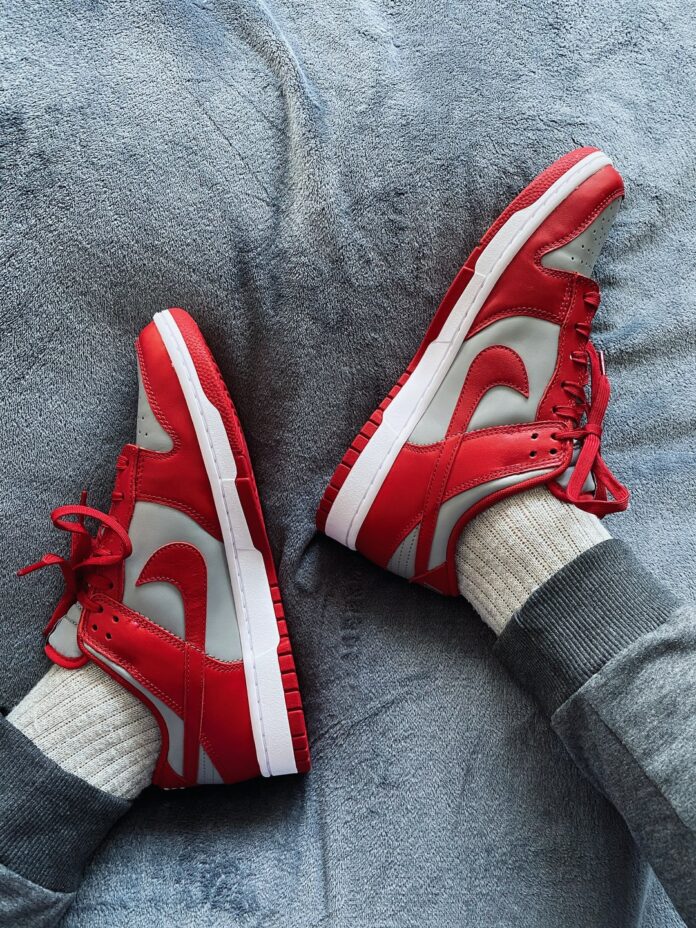 The Nike Dunk has been around for almost 40 years now. It was first released way back in 1985.

But you could make the argument that Nike Dunks are more popular today than ever before. They’ve become so popular that Nike has made it a point to release a bunch of Nike Dunk throwbacks in 2022.

Are you interested in picking up a pair of Nike Dunks? Well, before you do, you should be aware of the fact that you can choose between Nike Dunk Lows and Nike Dunk Highs. You’ll need to decide which one would work best for you.

The Nike Dunk Low and Nike Dunk High both come with pros and cons. You should keep them in mind when you’re looking around at different Dunk Low and Dunk High models and trying to figure out which Nike sneakers you want.

Check out some of the pros and cons of these Nike shoes below and then select the Nike Dunks that you like the most.

When Nike Dunks first showed up on the scene, buying a pair of Nike Dunk Lows wasn’t even an option. In 1985, the only Nike Dunks that people could buy was the high-top version.

Why? It has a lot to do with the success of the Nike Air Force 1, which was released several years prior to the Nike Dunk. The AF1 was a huge success in part because of its high-top design. So when Nike put out the first Dunks, they stuck to the same format they used when creating the AF1.

But eventually, Nike would get around to releasing Nike Dunk Lows. It took them more than a decade to do it, but it was worth the wait for many sneakerheads. Learn about the pros and cons of the Nike Dunk Lows below.

The Pros of Nike Dunk Lows

Once upon a time, people wore both Nike Air Force 1s and Nike Dunks to play sports, skateboard, etc. As a result, it made all the sense in the world for them to come in high-top versions.

But as time went on, more and more people started to wear Nike Dunks in more casual settings. It’s what made Nike Dunk Lows so great.

Unlike Nike Dunk Highs which could be a little bit bigger and bulkier, Nike Dunk Lows were great for those who wanted to kick back and relax in them. They didn’t have to worry too much about their Nike Dunks dragging them down when they were running all over town in them.

Oftentimes, Nike Dunk Lows were also cheaper than their high-top counterparts. It’s another thing that helped to set them apart from Nike Dunk Highs and made them superior in some aspects.

The Cons of Nike Dunk Lows

Many people loved the introduction of Nike Dunk Lows once Nike finally got around to releasing them. If nothing else, it provided them with more options when they were in the market for Dunks.

But there have always been a few drawbacks to Nike Dunk Lows. First and foremost, they don’t provide the same kind of support that Nike Dunk Highs do. So if you’re going to wear them to, say, skateboard, you might find that Nike Dunk Lows won’t cut it.

Nike Dunk Lows also helped to make Nike Dunks more popular than ever before. They made Nike Dunks more mainstream, which is something that didn’t sit well with those who had been down with Dunks since the beginning.

That being said, almost everyone has now come around to accepting and loving Nike Dunk Lows, including those who’ve been wearing Dunks since the 1980s. But it’s the commercialization of the Dunk is something that could be seen as a con to some.

As we alluded to earlier, Nike Dunk Highs have actually been around for a whole lot longer than Nike Dunk Lows have. They’re the OG Nike Dunks, and they’re largely responsible for the overwhelming success of the Nike Dunk sneaker as a whole.

Nike Dunk Highs helped to popularize the Dunk model among sneakerheads. They also helped to usher in the era of Nike (and other sneaker companies!) releasing sneakers in a variety of different colorways.

At this point, there have been hundreds of different-colored Nike Dunk Highs put out into the world. Take a look at some of the pros and cons associated with them.

The Pros of Nike Dunk Highs

Nike Dunks are, by design, sneakers that were created to cater to skateboarders. Nike has pushed very hard for the skateboard community to embrace Nike Dunks over the years.

If you’re going to be buying Nike Dunks for skateboarding, Nike Dunk Highs will typically be the option that you’ll want to go with. These Dunks will provide your ankles and your feet with all the support that they’ll need.

Nike Dunk Highs are also the Nike Dunks that will provide you with the opportunity to take full advantage of all the colors that are being worked into Dunk models. They give these colors more space to breathe and make Nike Dunks a little flashier overall.

All of this would help to explain why Nike Dunks are so popular now and why they’re expected to continue to be popular well into the future. People have really come to love all the benefits that they get access to when wearing Nike Dunk Highs.

The Cons of Nike Dunk Highs

We really don’t want to sit here and knock the original Nike Dunks too much. It’s hard to hate on the Nike Dunk Highs when you consider how ahead of their time they were when they were first released.

But if we have to do it, we’ll say that one of the only downsides of buying Nike Dunk Highs is that they can be a little bit bulky for some people. You might not enjoy skateboarding as much as you normally do if you put a pair of these on your feet when you’re used to utilizing other types of sneakers.

You might also not love the feeling that you get from a pair of Nike Dunk Highs when you wear them all over the town. They might start to feel a little heavy and even cause your feet to sweat more than they would otherwise.

At this point, we’re nitpicking when it comes to the downsides of Nike Dunk Highs. But you should remember these things before picking up a pair. You might like Nike Dunk Lows better if any of these cons strike a nerve with you.

Would Nike Dunk Lows or Nike Dunk Highs Be Your Better Choice?

At the end of the day, only you can decide whether Nike Dunk Lows or Nike Dunk Highs would be a better fit for you. You should ask yourself a few key questions prior to picking up a pair of Nike Dunks and use your answers to guide you as you set out to buy them.

Here are the questions you should ask:

You should be able to figure out which side of the fence you’ll fall on by answering these questions. They’ll guide you in the right direction as you set out to purchase a pair of Dunks.

Where to Buy Both Nike Dunk Lows and Nike Dunk Highs

Just make sure that you shop for Nike shoes through a store that sells authentic Nike Dunks. It’ll guarantee that you’re happy with the Nike sneakers that you receive.

If we’ve learned anything over the last few years, it’s that the Nike Dunk sneaker isn’t going anywhere anytime soon. Nike Dunks have become more popular than at any time in the past, and it doesn’t appear as though that will change.

But the jury is still out on whether you should go with Nike Dunk Lows or Nike Dunk Highs when buying them. You should explore all your available options and go with the Nike Dunks that you think would be your right choice.

Look for other informative articles on style and sneakers by seeing what else our blog has to offer.