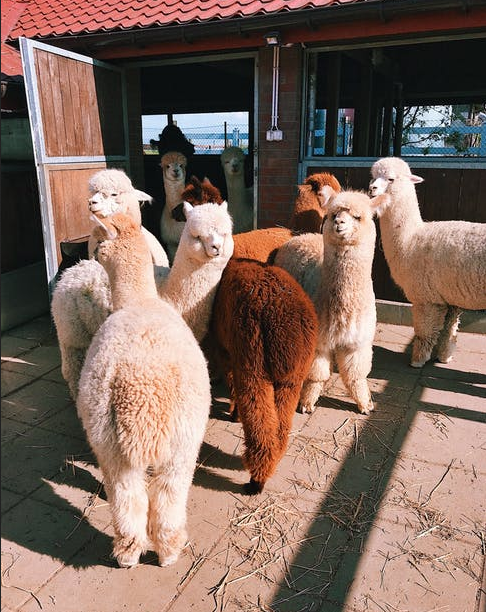 Recently, llamas have taken the world by storm. You can see cartoon llamas on clothes, school supplies, toys, and birthday cakes! And, you can even find llamas in video games like Minecraft and Fortnite.

The trend seems to have started in 2018 when Pinterest searches for llamas went up 75 percent in Australia. Soon, this craze spread to the UK and the United States.

Why do people love llamas? Besides their fluffy and adorable appearance, it likely has something to do with how unique these creatures are! So, let’s take a look at some interesting facts about llamas!

Llamas are vocal animals, so you may hear them humming from time to time. It’s likely that all the different tones have unique meanings and that llamas use these sounds to communicate with each other.

For example, mother llamas will hum to their crias (baby llamas), who learn to recognize their mom by her sound.

Later, all llamas imitate this humming sound to express their emotions, especially when anxious or uncomfortable. However, you may also hear them humming when they are excited or curious.

Raising llamas has become more popular in recent years, and not only for their wool. Since the 1980s, many farmers have had them as guard animals and kept them with their smaller animals, such as sheep or goats.

Even though they are friendly with the flocks, they are alert and even chase off dangerous predators like feral dogs or coyotes.

If you plan to get a guard llama, make sure that you keep only one llama with each herd. This increases their likelihood of bonding with the sheep, as two llamas may bond with each other and ignore the other animals.

3. Llamas Can Be Therapy Animals

Many people use dogs as therapy animals, but llamas are just as good at the job. Because they are smart and trainable, some people raise them to be professional comfort animals. Later, they go on to work in medical settings or nursing homes.

Llamas are generally easygoing but try not to make them angry. If this happens, they will likely spit at you. And, even if you are quick on your feet, their spit can reach distances of more than ten feet!

Moreover, an angry llama may also kick, charge, or bite. However, llamas only do this when they feel seriously threatened. And, these defense mechanisms are what make them great guard animals.

Nevertheless, you can avoid getting spit at by learning to read your llama’s body language. For example, before getting angry, llamas will stick out their tongues to show they are slightly irritated.

In the Andes Mountains, native people have used llamas to haul goods over harsh land for hundreds of years. However, llamas can only carry about 75 pounds, and if you overload them, they’ll probably lay down, refusing to move. They may even spit at you until you remove some of the baggage.

6. Llamas Are Related to Camels

Both llamas and camels are from the Camelidae family, which makes them distant relatives. Other family members include alpacas, guanacos, and vicuñas, all of which are native to South America.

However, llamas and alpacas are domesticated animals, and they are no longer considered wild. Rather, they are tame pack animals.

On the other hand, the guanaco is likely the ancestor of domesticated llamas, while alpacas probably originated from vicuñas.

7. Llamas Are Friendlier than Alpacas

Since llamas look similar to alpacas, people find it hard to tell the difference. However, llamas are taller and heavier, with longer, banana-shaped ears.

Another crucial difference between these relatives is their personality. While llamas are friendly and compared to dogs, alpacas prefer to keep their distance from humans. They’d rather be in the herds.

The Andes Mountains have cold and harsh winters, and if it weren’t for llamas, the native people might not have survived. They used dried llama poop as fuel for fires and to fertilize their crops.

But, don’t worry! It’s not as bad as you imagine, as llama poop has virtually no odor. So, next time you need fertilizer for your garden, why not get some llama manure?

Llamas are laid-back pets, and it doesn’t take much effort to care for them. While it’s true that you need at least an acre to have llamas, that’s much less than other animals like cows or sheep. And, they make great gardeners because they only trim the grass rather than uproot it completely.

Owning llamas is also profitable, as their wool sells for several dollars per ounce. Like sheep, sheering llamas doesn’t hurt them but keeps them cool in the hot summer. Just be sure not to sheer the bottom inch of wool, as this protects their skin from the sun.

Of course, not everyone has the time, money, or land to care for a llama. So, in this case, buying a llama plushie is your best bet!

So, why are llamas popular? After learning these facts about llamas, you likely understand why we find them so lovable.

Thus, if you’re looking to expand your farm, llamas are likely the answer. They’ll protect your herds, give you company, and even make you some extra cash.

Still, even if you can’t have a pet llama, you can always commemorate your fleecy friends with fun merchandise and share these interesting llama facts with your friends!

Did you enjoy learning fun llama facts? If so, check out more of our entertaining content!

Pests or Pets? What You Should Know About Stick Bugs

What Is an Actuator?